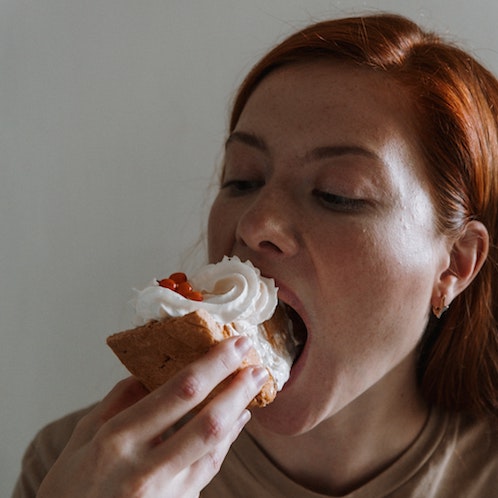 Emotional Eating – Are You Eating Your Emotions?

Emotional Eating – have you ever thought the link between your emotions and your ability to achieve healthy eating habits?

I hear all too often: “Right, I’m going on a diet” or “I’m not eating chocolate” and then all you do is end up thinking about chocolate and food.  Sound familiar?!!  You could end up thinking you have a problem with food when it could be you absolutely don’t and you just need to acknowledge an emotion or a feeling instead of deciding to eat more/not eat at all.

Emotional Eating in the Media

I watched the Freddie Flintoff documentary where he opens up about his battle with Bulimia over the years.  I was really moved by his story.  I felt he was very honest and courageous talking about his issue so openly.  I was also very aware at how worried, confused and shocked he looked in parts of the programme when professionals questioned him on his issue and also while he talked to others about their Bulimia.

Listening to him talk about where his problem started, it was clear that he was hanging on to a negative comment he heard in the past.  He was clearly still upset and affected by this comment and I couldn’t help but think if allowed himself to focus on what needs to happen for him to move on or learn from this negative comment, he would be able to have more control over his Bulimia and maybe food would not be the enemy anymore.

It’s amazing how just 1 comment can stick with you for years and have such an effect on your life.

I have recently been working with a female client who has been anorexic in the past.  Although her anorexia was many years ago, she still had control issues around food. She came to me a few months ago as she had stopped eating and was only having tea, coffee and mints to get her through the day.    She wanted to change this and eat again so she could be fit, healthy and feel and look good.

It was an emotional start to her journey, but we didn’t really focus on the food itself until a few sessions in.  We focussed firstly on her emotions, values, her past experiences and what she was telling herself.

We identified that one comment from a negative experience in her past had led her to feel a certain way towards herself.  This comment stayed with her for years.

Food became something she controlled to the extreme, not because she had a problem with food but because of this one negative comment.

By not focussing on the food we worked on the emotions linked to the negative comment. Over the months we were able to reduce the negative emotional attachment to that comment and now this lady is eating food regularly, she feels healthy and looks great.

Listening to her say this was absolutely fantastic! Such a positive result.  I was so grateful I was able to help and be a part of her journey.

Over eating and under eating often has nothing to do with the food itself but about how you feel and what you get emotionally from over or under eating.

Whatever you want to do,  lose weight, gain weight, tone up, build muscle, firm up, get rid of a flabby stomach, eat healthy, drink water, eat less, eat more,  focus your thoughts to your emotions instead of focussing on the food and you may find you can achieve your goals without having food as the enemy.